The Intimate Connection between Henan Mine and Shanghai Cooperation Organization (SCO)

2018-06-11
From 9th~10th of June, the Qingdao summit of SCO was held in China. It is the first summit after SCO expansion, where the leaders of member countries gathered at the Yellow sea coast to make plan of development. World focus on China again. 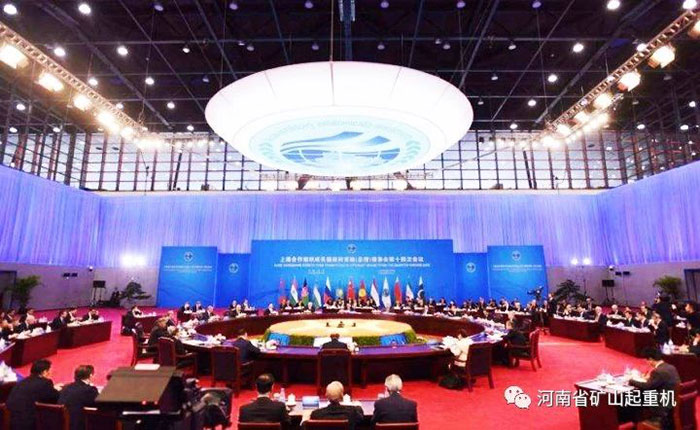 In the past 17 years, SCO has steadily promoted the construction of fate community, district security and built one new model international relations of mutual respect, fairness, justice and win-win. It has made a lot of contribution on global cooperation.
Henan Mine, as one represent of earliest “going out “enterprises in China, has already built deep relationship with the SCO member countries since the beginning of factory founded. Since 2002, Henan Mine has exported more than 8000 sets equipment to these member countries.
PAKISTAN
Pakistan, as China’s good brother and partner, is one of the earliest countries which Henan Mine exported the equipment to. Henan Mine made a contribution on Pakistan’s infrastructure construction.

Company employees attending the Pakistan crane exhibition
The Rail Traffic Orange Line Project, in Lahore of Pakistan, is one early demonstration project between China and Pakistan. The successful implementation and smooth operation of the project will be of great significance to China and Pakistan. The project is the first officially launched large-scale rail traffic project under the “belt and road”, was attached importance by both countries. 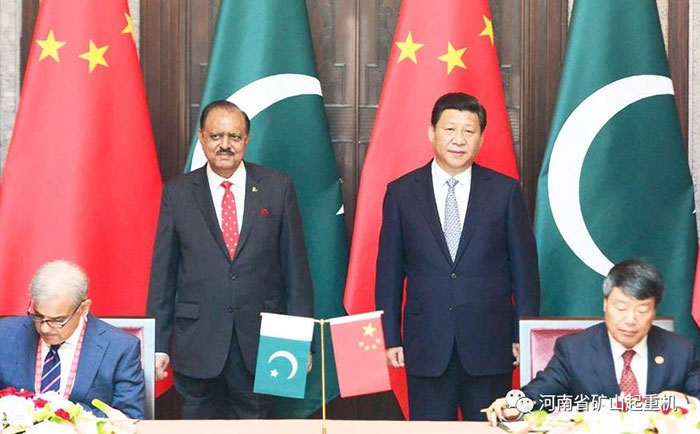 Chinese President Xi Jinping and Pakistan President Hossain witnessed the signing of “China and Pakistan intergovernmental framework agreement on Lahore rail traffic Orange Line Project”
The main line of Orange Line project is 25.58 kilometers with 26 stations, including 24 elevated stations and 2 underground stations. The vehicle sections were set on the north of line, the parking lots were set on the south of line and 2 main transformer substations in the whole line. Henan Mine provided 32 sets crane equipment for vehicle sections and parking lot for vehicle maintenance. 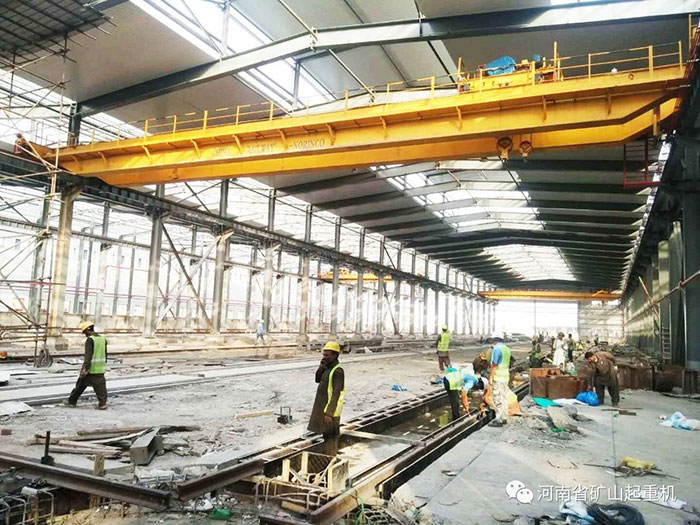 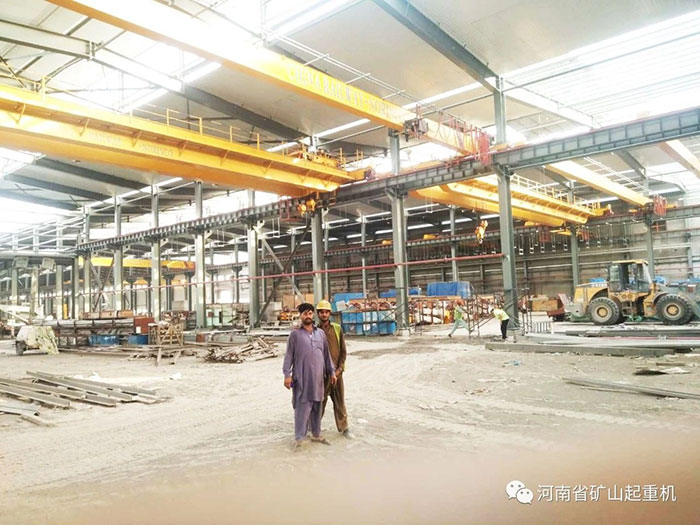 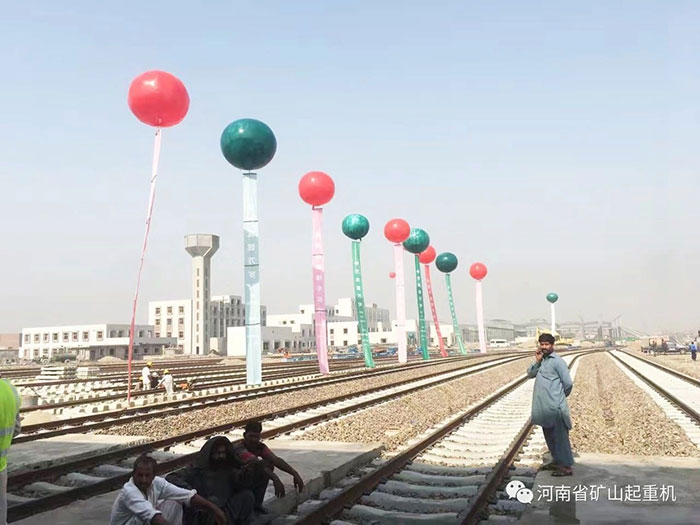 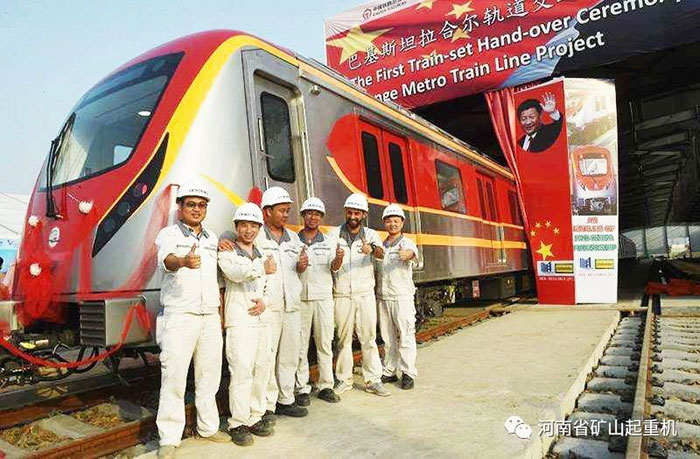 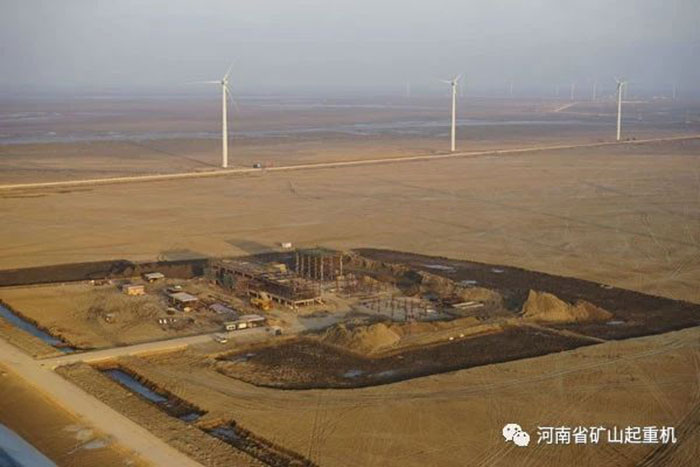 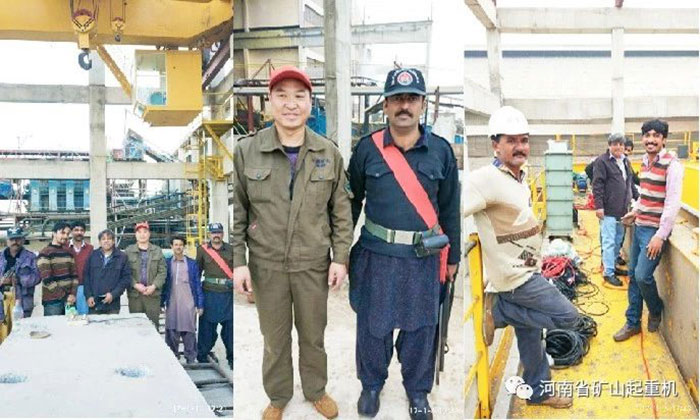 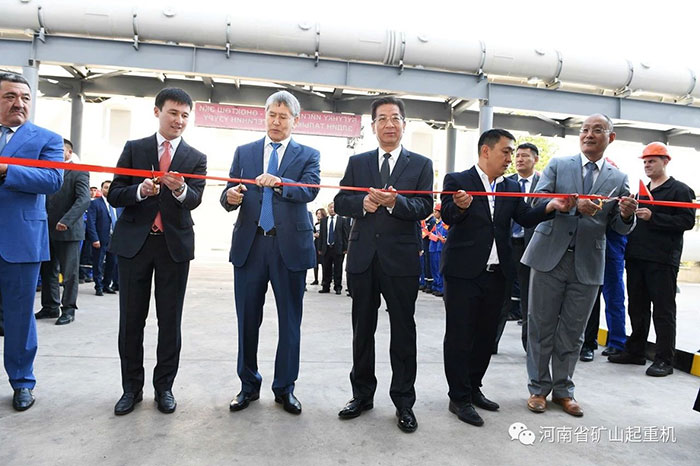 This project is the biggest thermal rebuild project in Kyrgyzstan, which promises the power and heating provide for capital city.
In this project, we provide 1 set 50 ton double girder overhead crane for maintenance work in steam turbine generator room. 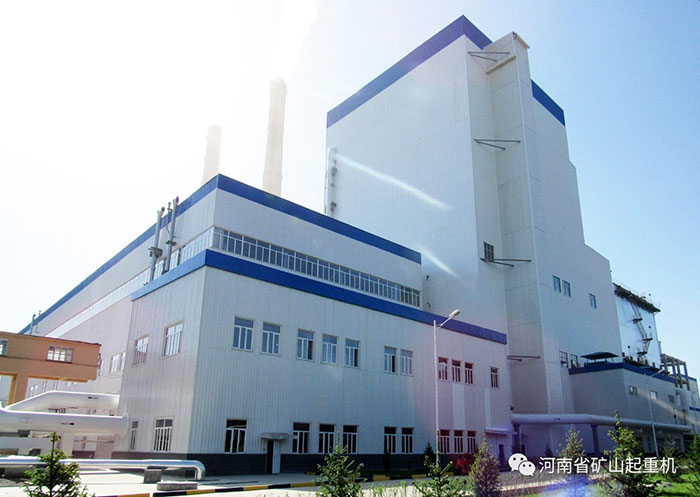 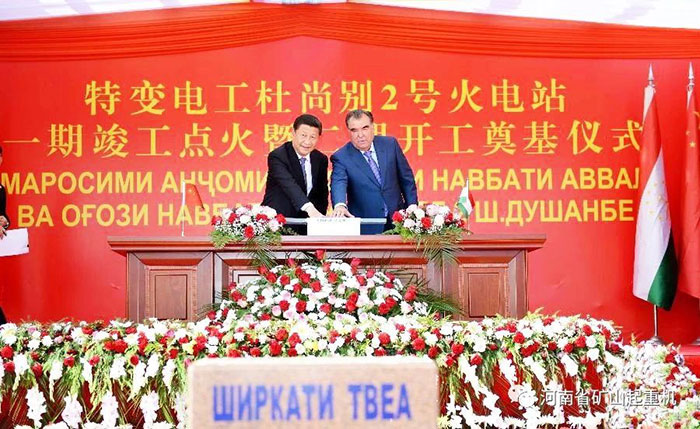 The capacity of the first phase of “Dushanbe No.2”thermal power plant is 100 thousands kilowatts, which is the first thermal power plant helped by China after Tajikistan independence. This project solves 40% power supply and heating supply problem in Dushanbe.
Our crane is special used for stator rotor of generator set maintenance work in this project. 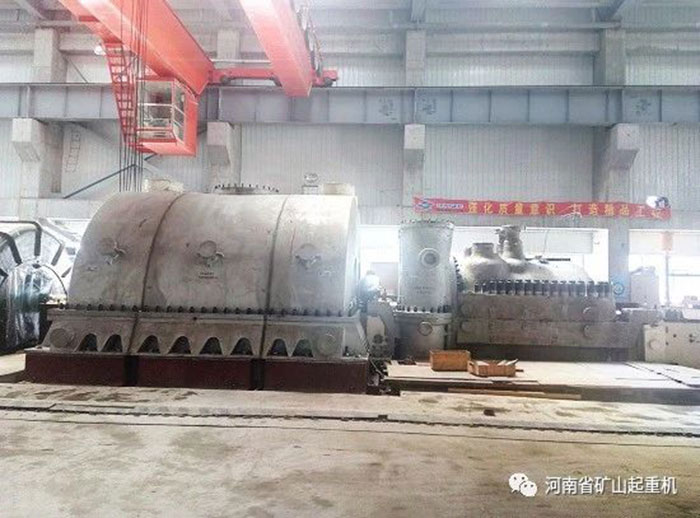 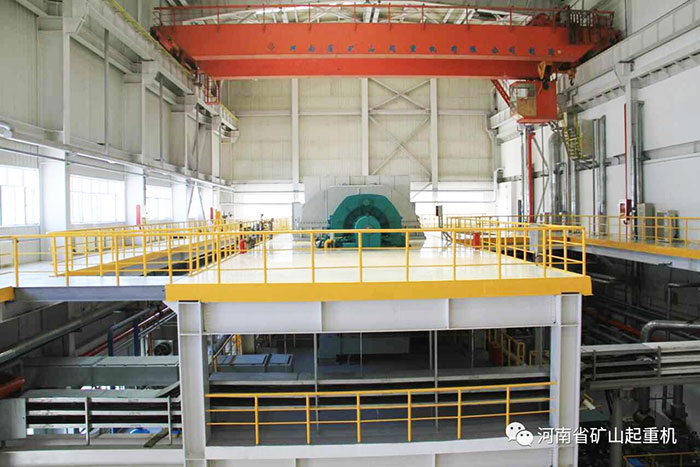 RUSSIA
The port of Krasnodar is located in the south of Russia. It is located on the right bank of the Cuban River, about 120~150 km from the Black Sea. Because of its high latitude and cold climate and long winter in Siberia, we provide 1 set MGAA636T-25M+10/11MU container gantry crane. The special designs and material selection have been made for adapting the -40℃ cold weather. 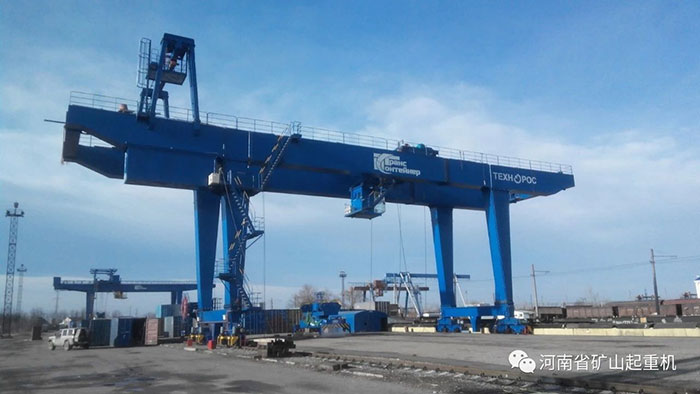 When temperature is below -30℃, the steel plate will be very fragile and cable will be rigid as steel bar. Also, the mechanic parts will be frozen with ice and lubricate will be frozen. Crane brake, wheel and rail will be covered by ice, PLC won’t work normally and air conditioner will stop working, which is big challenge for design crane in this place. 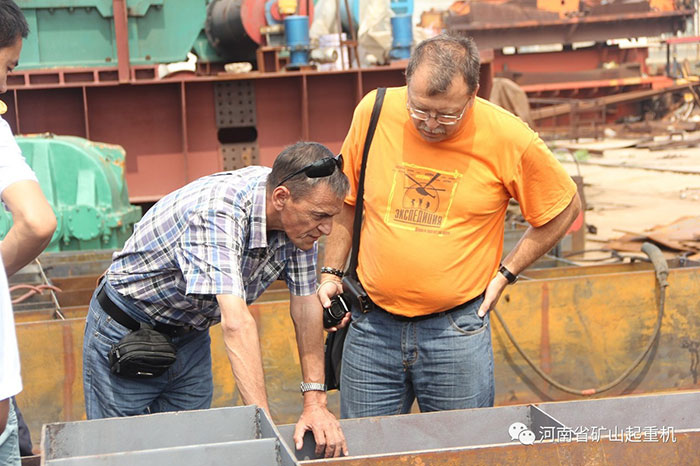 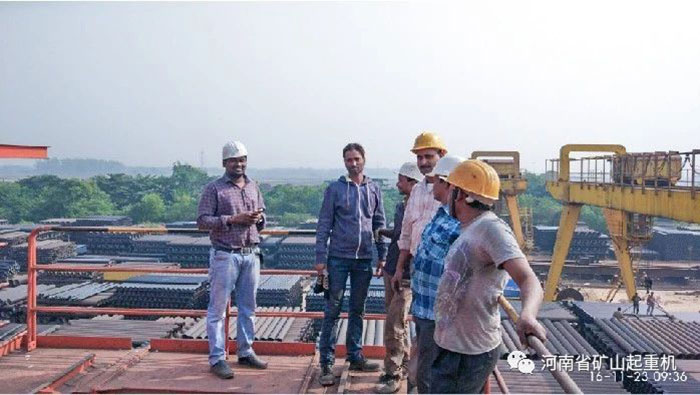 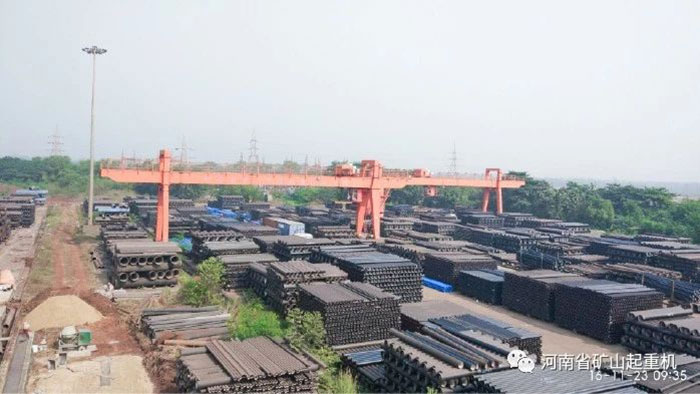 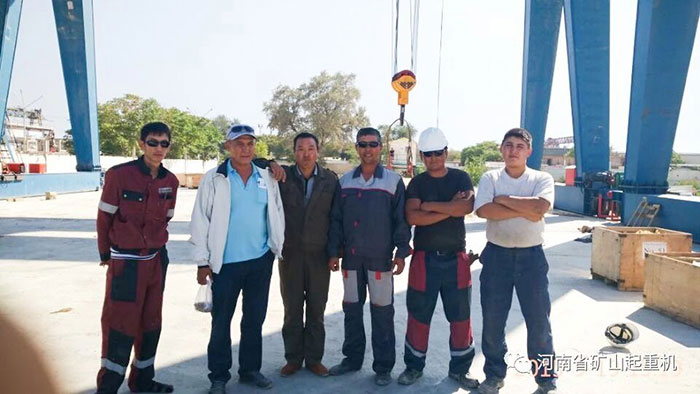 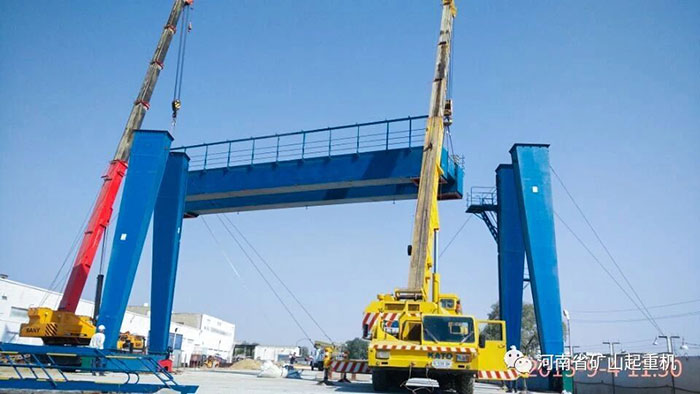 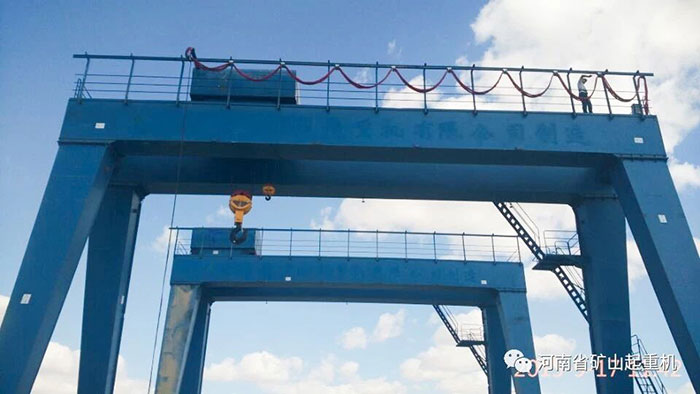 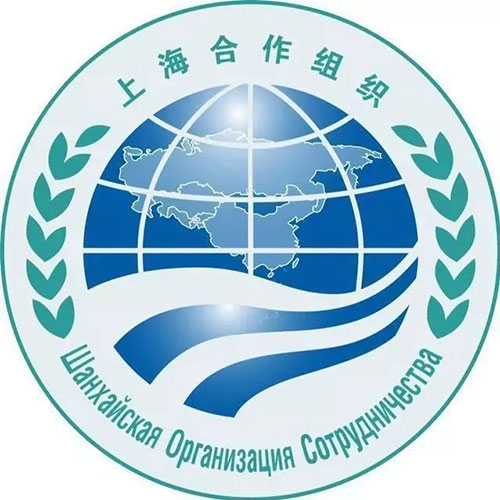 Shanghai Cooperation Organization
The Shanghai Cooperation Organization (SCO), or Shanghai Pact, is a Eurasian political, economic, and security organization, the creation of which was announced on 15 June 2001 in Shanghai, China by the leaders of China, Kazakhstan, Kyrgyzstan, Russia, Tajikistan, and Uzbekistan; the Shanghai Cooperation Organization Charter, formally establishing the organization, was signed in June 2002 and entered into force on 19 September 2003. The original six nations, with the exception of Uzbekistan, were previously members of the Shanghai Five group, founded on 26 April 1996 in Shanghai.
India and Pakistan joined SCO as full members on 9 June 2017 at a summit in Astana, Kazakhstan. The SCO is often dubbed as the "alliance of Asia", due to its growing importance and centrality in the Asian continent. It is the largest regional organization in the world in terms of geographical coverage and population, covering three-fifths of the Eurasian continent and nearly half of the human population, and is one of the world's most powerful and influential organizations. (Quoted from Wikipedia)